PASARGADAE, the spacious capital and last resting place of Cyrus the Great (559-530 BCE). Located in northern Fārs in the fertile and well-watered Dasht-i Murghab (Dašt-e morḡāb), the site stands 1,900 m above sea level at 30°15’ N and 53°14’ E.  In a straight line, Pasargadae lies 40 km to the northeast of Persepolis; and, while the modern road takes 80 km to cover the distance between the two sites, the route taken by the pre-modern highway, following the relatively direct course of the River Pulvar through the spectacular Tang-i Bulaghi (Tang-e Bolāḡi), was only 50 km in length.

As far as how the site of Pasargadae has reached its present form and condition, it should be noted that our knowledge on pre-Achaemenid periods at Pasargadae is very scant. It is, however, clear that the plain of Pasargadae had been a 23 considerable centre in the 4th and 3rd millennium B.C. No connection is found between these prehistoric mounds and the Achaemenid Pasargadae. It is a possibility that the site had been occupied before the Achaemenians, in Elamite period (i.e. before the 6th century B.C.). Anyway, the importance of the site rose with its choice as the first capital of the Achaemenians in mid-sixth century B.C. After Cyrus the Great, Pasargadae served as an important dynastic centre for the Achaemenians until the fall of the Achaemenid Empire in 330 B.C. Aside from the Tall-e Takht that played a fortification role, most of the monuments on the plain of Pasargadae were abandoned after the Macedonian conquest. Without any maintenance, the palaces were gradually destroyed. Nothing is recorded of Pasargadae during the following Persian empires, i.e. that of the Parthians and Sassanians. Few poor carvings in Pahlavi (middle Persian language) have been attributed to the early Islamic period, probably to the late 7th century A.D. It was after the fall of the Sassanians, from 7th century onwards, that the Mausoleum of Cyrus was called the Tomb of Mother of Salomon. The attribution of the site by the local people to Salomon or his mother certainly preserved the monuments from fanatic destruction that can be seen on some of the constructions at Persepolis. Pasargadae regained its importance in the 10th century A.D. under the Deylamites who erected a small mosque around the tomb. This mosque erected by column drums of the palaces shaped a courtyard; three entrances lied in northwest, northeast, and southeast of the courtyard; all of these had been taken from the Achaemenid constructions of the site. It seems that after 14th century A.D., Deylamite mosque and madrasseh were abandoned. The people settled nearby, at the present village of Madar-e Soleyman (Village of Mother of Salomon). During the centuries, they continued to reuse stone elements of the Achaemenid monuments for their private uses, save for the Mausoleum of Cyrus and the mosque around it. Until a very recent date, they used to remove stone pavement of the Palaces to make tombstones for village cemetery. Travellers’ description in the course of the 19th century gives an interesting account of the gradual disappearance of architectural elements of the monuments. For instance, one does mention the disappearance of the trilingual inscription above the winged-figure of Gate R, sometime between 1850 and 1870. It was not until 1928 that scientific excavations began at Pasargadae by Ernst Herzfeld. In 1950, Ali Sami of the Archaeological Service of Iran undertook a series of excavations on the palaces and the Tall-e Takht. He also made some restorations on the Mausoleum of Cyrus and the palaces. In the early years of 1960’s, David Stronach carried out a meticulous examination of all the Achaemenid monuments of the site. In the late 1960’s and the early years of 1970’s, Giuseppe and Ann-Brit Tilia carried out several campaigns of restoration at Pasargadae which remain the essential restoration work at the site. The Tilias could replace some architectural elements on their original position and reconstruct partly Palaces P and S; they also worked on Gate R and the Zendan; the latter would have been collapsed without Italians’ restorations. In 1970, in the occasion of the 2500th anniversary of the Persian monarchy, the mosque around the Mausoleum of Cyrus was destroyed. The restaurateurs had to bring back the architectural elements to theirs original position in the Achaemenid monuments. So the courtyard disappeared, and a platform was built around the Mausoleum of Cyrus preparing the monument for the visit of the shah of Iran. After 1979, no major change has taken place at Pasargadae. The Mausoleum of Cyrus the Great is still considered 24 as a place of pilgrimage by local people. This fact has had an important role for protection of the monument.

Why is Pasargadae a must see?

The principal significance of Pasargadae is in its being the first dynastic capital of the Achaemenid Empire, built by Cyrus the Great, the founder of the dynasty, in the heart of the homeland of the Persians. This great empire extended from the Eastern Mediterranean and Egypt to the Hindus River in India. It is considered the first empire to be characterized by a respect to cultural diversity of the different peoples. This characteristic was also reflected in the royal Achaemenid architecture, which became a synthetic representation of the different cultures. Pasargadae represents the first phase of this development into a specifically Persian architecture, which later found its full expression in Persepolis. Pasargadae also became a prototype of the Persian garden concept involving pavilions and palaces with porticoes (in Persian: ‘paradayadam’ or ‘paradis’, ‘pleasant retreat’, ‘park’).

Today, Pasargadae, still lives in the heart of Iran and in Fars province, having splendid remains of ancient Achaemenids empire. Pasagadae is a symbol of an era in Iran’s long history, which impacted this land for centuries, even to the present-day Iran. 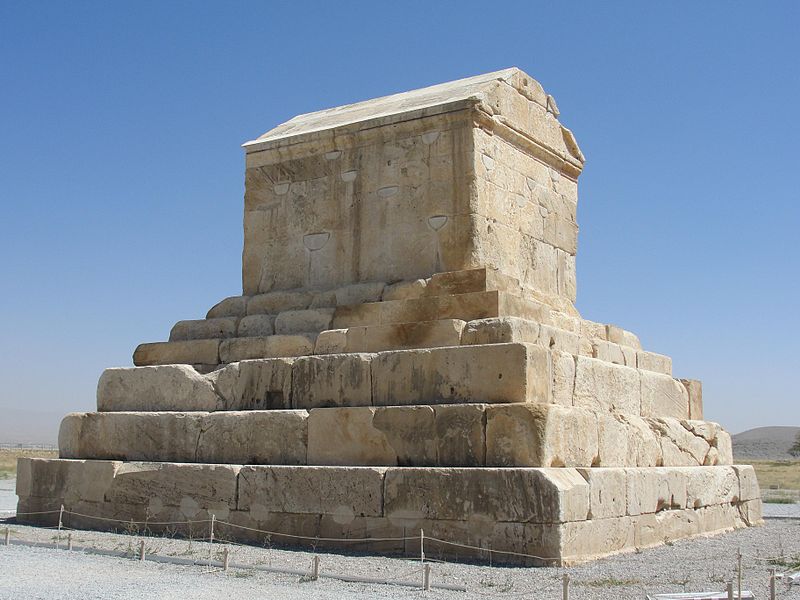