How to reach: From Tehran, you can get off at Shahre Rey metro station, then take a cab to the tower.

How old is it: It dates back to Seljuks period, about 1000 years ago.

Suggestions: You can also visit the ancient fire-temple and Shah-Abdul-Azim shrine and museum in Shahre-Rey.

Tuğrul Tower (also transliterated Toghrul, Tughrol, or Tughrul) is a 12th-century monument, located in the city of Rey, Iran. Tuğrul Tower is near Rashkan castle.

The 20 meters tall brick tower is the tomb of Seljuk ruler Tuğrul Beg, who died in Rey in 1063. Originally, like other monuments of its time, it was capped by a conical dome (گنبد, gonbad), which would have added to its height. The dome collapsed during an earthquake.

The thickness of the walls varies from 1.75 to 2.75 meters. The inner and outer diameters are 11 and 16 meters, respectively. The exterior shape is that of a polygon with 24 angles in its design, which is thought to contribute to the structure’s stability against tremors.

At the top of the tower Kufic inscriptions were originally observable. Naser al-Din Shah ordered some restorations to be made to the top part of the tower, which was collapsing in 1884.

This tower probably has a astrological function, too. The old man which is in charge of the tower teaches you how to estimate the time by looking the shadow on the tower. 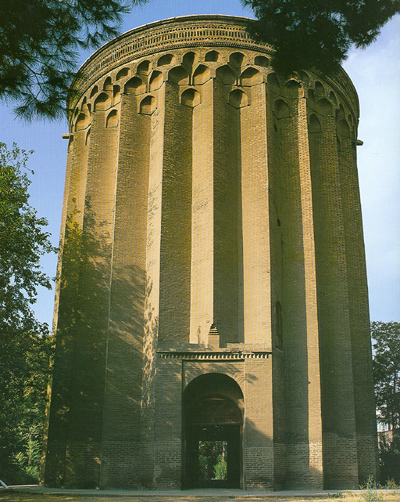